Our gratitude and thanks go to the extraordinary writers who make the Lorian Hemingway Short Story Competition what it is today: Thirty-five years of a beautiful journey of words crafted from heart and marrow, 35 years of my having had the honor of reading the stories of those who have gone on to make their mark in the world of literary fiction. Some of you have become lifelong friends and shared with me the joy of your success. I am grateful for you all, for enriching the world with your words, for keeping the art of fiction alive. For ignoring the destructive aspects of technology in choice of a life pursuing what means more to you than anything else: Writing! Bless you for your words that so often break my heart wide open. You possess courage beyond measure for having entrusted your stories to another and you will remain, as always, my heroes.

This year we received 857 Stories from the United States and around the world, including Russia, France, Germany, Australia, South Africa, Sweden, Ireland, Scotland, Singapore, Italy and India, to name a few.

Herewith the list of Honorable Mentions and the top three winners in our 2015 competition Our First-Place winner will receive a cash prize of $1,500 and publication in Cutthroat: A Journal of the Arts. Second and Third-place will receive cash prizes of $500 each. Please know that Honorable Mention are listed in no particular order. 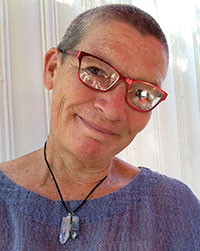 Palm Springs, California
For her story “Between my Ribs”

I am a writer and a teacher, but I tend to reverse the order without meaning to, and I’ve come to accept that often I am indeed a teacher first, though more and more being a writer has come to permeate my days, to live in my cells. I earned my M.A. in English with an emphasis on creative writing from Sonoma State in 2001. I teach online for Mendocino College, having let go of other schools over the years to make more room for my writing. I began writing in earnest 17 years ago, thanks to a one-day writing workshop taught by Robin Beeman (through Sonoma State extension) that welcomed beginners and promised we would walk out of there having written a story. (And I did.) But aside from my first eager attempts to publish my work in The New Yorker (!!), I only began entering writing contests a handful of years ago.

Having “Between My Ribs” win first place in the Lorian Hemingway Short Story Competition is my first real claim to fame. I feel heartened, excited, terrified and thankful. All together I’ve had six of my pieces make it to the final round in eleven contests. I was born in Germany and live in Palm Springs but am still a northern Californian at heart. I am in love with Mexico and dream of walking the camino de Santiago de Compostela one day (across northern Spain). I am honored to win this contest and grateful to Lorian Hemingway for being so generous with me when she called to tell me my story had won. Her kindness and warmth made winning all the sweeter. I plan to keep practicing my craft for the rest of my life and love picturing a good, messy pile of my published books sitting nearby when I reach the end of it.

Riba Taylor: Palm Springs, California, for her story “Between my Ribs”